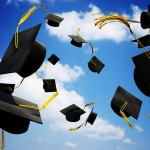 It’s a worrying moment for a public speaker – when you turn up at an event, take one look at your audience and realise you’ve written the wrong speech!

That’s exactly what happened to me when I arrived at the award-giving ceremony at North Notts College in Worksop.

I should have realised things were not quite as I had anticipated. For one thing I arrived an hour early, expecting the place to be empty and giving me time to make last minute preparations.

But in fact I found the car park full and a vast crowd of people, many wearing full gowns and mortar boards. They clearly took their education seriously.

Inside, the prize-giving hall was already packed, it was eventually to fill with more than two hundred people.

But it was when I looked at the graduating students that I realised I might need a serious re-write.

I had imagined an audience of 18 to 19 year olds picking up perhaps their first vocational qualifications. My speech was full of stirring words about young people and the journeys ahead.

But it soon became clear that, how can I put this, many of the audience were already well on the road, some of them not too far behind me.

Yes, they were mature students.

I sat down to quickly rewrite the speech, then I had a better idea. The evening was all about them, and most of them looked self-possessed and confident enough to do the talk themselves, so I decided to let them.

It was a good decision. Besides, I had found the speech hard to write. I had been asked to speak because I was brought up nearby, even went to school in Worksop for a short while and I was passionate about education and the importance of qualifications.

The story of how they got me out of a future which would have involved going down the pit to becoming a BBC correspondent was the one I was here to tell. But journalists don’t like talking about themselves, they’d usually rather let someone else do the talking. I find they’re almost always more interesting than I am, and so it proved.

Using my tv reporter’s antennae I found a couple of people who would be happy to be interviewed by me. And so I gave a few minutes of an improvised speech, showed them a few clips of me on telly to prove my credentials and then I picked up the microphone and wandered, Gerry Springer-like, into the audience and began interviewing the students.

And what stars they turned out to be; Will was a teacher at the college but was literally practising what he preached by spending his spare time studying for more qualifications.  Rachael told us how hard it was balancing study with life as a single mum and Mary drew a gasp and then a spontaneous round of applause from the audience when she revealed that she had studied for her management and leadership qualifications in between looking after her seven children!

It went so well that I think some people thought I had researched it earlier, in fact it was just luck and a gut feeling that they would have a better tale to tell than me.

As I drove away I couldn’t help reflecting that I’d been hired to give an inspirational speech to the students and had instead come away inspired myself.